A downloadable game for Windows, macOS, and Linux

I wish there was a sandbox mode

This has to be one of the most satisfying games that I have played.

...and feels smashing to!
I like being able to haul everything around with the perky physics system.

Simple yet super fun, I loved it! I enjoyed how the music cut out when smashing a window...even know it’s a bug (I read somewhere) it’s better this way 😂 the game starts at 7:13

This game is wacky as hel

I played the game, its a lil short. But I enjoyed it :D

YOUR GAME IS VERY ENTERTAINING!!!

Surprising fun game, loved how the music just stopped when breaking a window hehe.  Would love to see more levels and objects, maybe also a guards or something you have to dodge. God job on it.

The music stopping was originally a bug but it just felt so perfect that I had to make it a feature.

I really appreciate the name of the bank.

It was fun af to throw stuff out the window lol

This is a very well made game considering the size. I love how it has no lag, but maybe you could update it? (maybe levels and such). A leaderboard would be great. In my opinion, I think it deserves a 4 1/2 stars out of 5.

(Gameplay below but first, my review and take on the game :D)

This was a really fun game to play! I loved the bits of comedy in it, stealing toilets and sinks for what ever reason too. Especially that picture of "Nicolas Cage" haha.

My favorite is when you bash the glass and break it, and the music stops for a few seconds which I found to be quite hilarious in my opinion.

Great game! Well made and  fun.

Heist is a unique and comical game about looting everything and breaking stuff. One that’s easy to learn but tricky to master. By everything I mean literally anything that’s not part of the building foundations! Benches, sinks and pot plants are just some of the objects you’ll be flinging around as you try and cash in on time.

You’ll often find that it’s sometimes quicker to score by breaking through a window than it is to run to the doorway.

The attention to detail is fantastic to, no glass pane breaks the same way twice and every shard has its own physics and weight. The graphics are reminiscent of Pixar models and the music has an Jazzy Noire vibe to it.

The physics are realistic with just that bit of a whimsical edge. There are a couple of related “glitches” such as flying on a table your holding, that were left in deliberately to add to the strategic options and humour.

You learn a little bit more with each subsequent run and start to chase that elusive score even more. In latter playthroughs you’ll find the game swaps from a Zen experience to a frantic one. Trying to plan the fastest route through the various treasure zones whilst making smashing improvised exits.

At the time of writing this gem was criminally underpriced (I’d be willing to part with $10 for it). 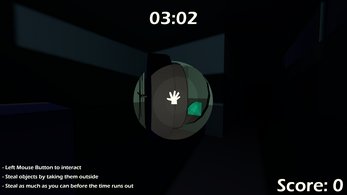 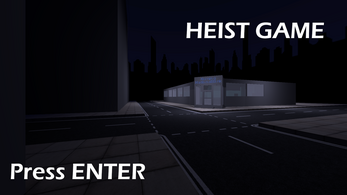